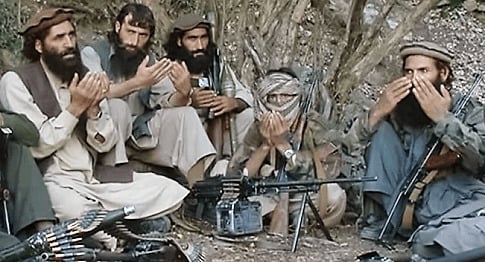 In this article, I will describe the propaganda that causes war and the pro-war fallacies that most New Zealanders fall victim to.

The wars of the 21st century are fought for resources and to demonstrate a nation’s power. War has no use to anyone except bankers and politicians. New Zealand’s political system, with its voting system and allegedly free media is supposed to keep citizens informed. But, as we will explore, the opposite is true.

The media exists to feed false information to citizens for the purpose of creating a false consensus while silencing any trace of dissent. As a small island nation with limited GDP, production, and resources, the only war that New Zealand should fight is a defensive one in the event of invasion. Yet through indoctrination and omission of basic facts, New Zealanders have been tricked into supporting wars in countries that they know nothing about and do not necessarily have a naturally occurring dispute with.

New Zealanders like to dream of themselves and their nation as a force for peace. Should the army deploy, it must be seen to be done only for the purpose of liberating civilians from a villainous and unjust ruler. A speech from an American President is required if a war is to start. New Zealanders require information from the media and military allies before they are willing to support a fresh conflict. This sustained propaganda is crucial for initiating a conflict. Similar to other Western peoples, New Zealanders need a tailored message about peace, refugees, and bringing bad guys to justice in order to muster support for wars.

Additionally, the conflict requires continued support from the media. For this reason, the army allows embedded journalists to visit army bases and secure areas inside Afghanistan. New Zealanders see a limited perspective from an English-speaking journalist, much like themselves, who is only allowed to film approved scenes, yet these reports appear genuinely independent. The embedded journalists believe themselves to be impartial observers when in reality they are being guided like tourists in North Korea.

Consequently, New Zealanders are fed pro-war propaganda and never hear an independent voice. They will never be shown the hectares upon hectares of Afghanistan’s opium crops that supply heroin addicts worldwide. Nor will New Zealanders be shown the aftermath of a truck bomb, or a map of the territory that the Taliban control, even after 20 years of attempts to suppress them.

During the years of the Obama Administration, New Zealand’s John Campbell once interviewed John Pilger and asked if things would be better under the Democrats. Pilger replied that it didn’t matter whether Democrats or Republicans were elected, the bombs would fall regardless of who is the President. In 2021 News Hub would not consider interviewing someone who criticises American policy. All dissent is treated with hostility by the New Zealand political establishment. Alternative opinions, whether true or false, are suppressed. Anybody speaking an alternative opinion is perceived as a Russian or Chinese agent, or a supporter of terrorism, chaos, and fringe theories.

New Zealanders are led to believe that the hybrid government-media system is their loving keeper, a friend which protects us from fake news and dodgy information that could lead to catastrophic mistakes. Since the 12th of September 2001 and subsequent wars, there has been an increase in the number of truck killings and stabbing attacks carried out by Muslim extremists. Similarly, there have been two high casualty shootings with an anti-immigration motive, which arguably wouldn’t have happened in the pre-911 world.

New Zealand’s media has sought to downplay terrorist attacks by Muslims while giving disproportionate coverage to terrorist attacks carried out by Whites. New Zealand’s media has no interest in examining the cause-and-effect of Muslim terrorism. However, government reports orchestrated by the NZSIS indicate that disaffected Muslim immigrants, migrants, and refugees are on the intelligence community’s radar. With that being said, nobody in the media questions why these Muslim terrorists massacre innocent people with trucks and stab them to death. Could it be that many of these people fled their countries due to wars caused by political elites in Israel and America? Perhaps they hate our policy of wars, but nobody is talking about that on The Project or Seven Sharp.

In the case of the Australian psychopath Brenton Tarrant, the media scrambled to link as many people to the attack as possible. They did make an effort to look at the causes of the attack, but their investigation was politically motivated against patriots, and again, it ignored the full catalogue of background issues dating back to 9/11 and beyond. The media’s list of alleged inspirations included anti-establishment, pro-speech political websites which offer alternative viewpoints to citizens. Perhaps instead of blaming the meme culture and the free web, it would have been more useful to New Zealanders if Patrick Gower had looked into the Central Intelligence Agency’s covert war inside Syria, and the millions of refugees from that war, which caused so much fury among nationalists around the world.

Brenton Tarrant is a by-product of America’s post-911 wars that have grown beyond control, not a by-product of free speech and a free web. The war on terror has caused terrorism that wouldn’t have existed otherwise. Now governments are using their own evil wars to promote web censorship and increased restrictions on civil liberties, particularly on speech. Young computer science graduates and ordinary government workers are groomed to work for Security Intelligence Service and Government Communications Security Bureau, where they are told that the New Zealand People are the enemy. In fact, it is the New Zealand Government who are the terrorists, traitors, and the enemy of humanity. These disgusting pigs at the senior level of intelligence agencies (and their handlers in Parliament) do everything they can to enable America’s hostile policies simply because the pay is too good to refuse. They actively support an agenda that increases global tensions, decreases societal harmony, increases refugees and terrorist attacks by different factions, be it Muslims or non-muslims. All for money and power. The battle isn’t ordinary people versus racism, the battle is ordinary people versus the oligarchs who control the media and government, and who set the global agenda against our wishes.

Ultimately it is the fault of New Zealanders themselves that the cycle of violence and chaos goes on forever. Journalists could condemn alleged white supremacy on TV every single day for the next thirty years and nothing would change, so long as they ignore the root cause of the problem. Unfortunately, the government and media collude to promote wars and global instability, because they are slaves to the billionaire class and war profiteers.

They lied about the Wars in Iraq and Syria and they covered up the Afghan heroin and the Taliban victories so that New Zealanders would be comfortable extending the war for a total of 20 years, under the pretense that some sort of progress was being made. There is no justice in these wars, and the notion of justice is just a lie designed to deceive well-intentioned New Zealanders into supporting wars. New Zealand needs a fresh approach to the anti-war movement. New Zealanders must realise that modern wars are fought by the deletion and omission of information and that the true target of these wars is the civil liberties and privacy and free speech of our citizenry. New Zealanders have nothing to gain from a war in Ukraine or Taiwan, yet they will go along with one, if (or when) it happens. The only impediment for the rich and well-connected is independent websites and political organisations that are independent and free of neoliberal governmental control.